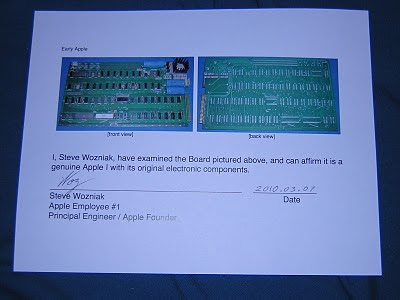 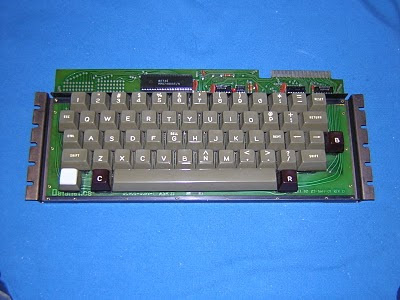 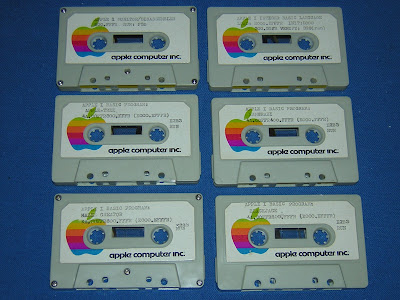 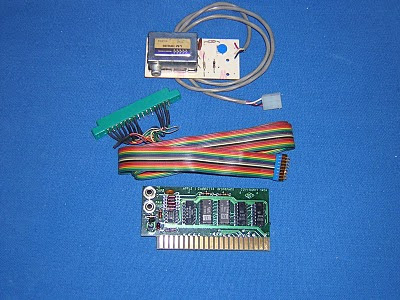 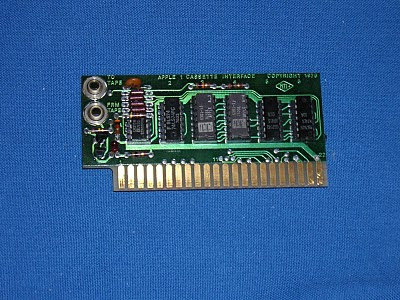 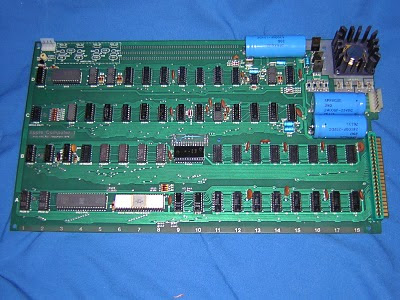 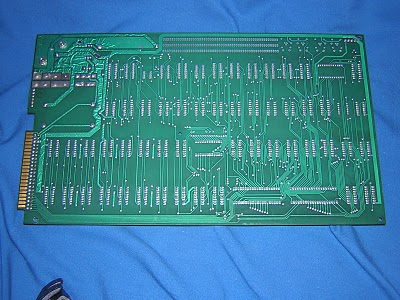 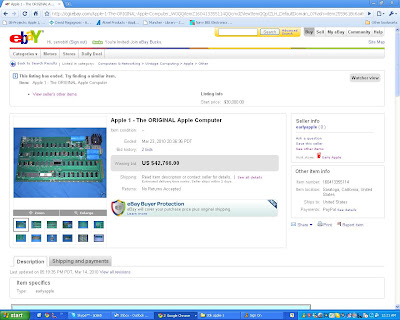 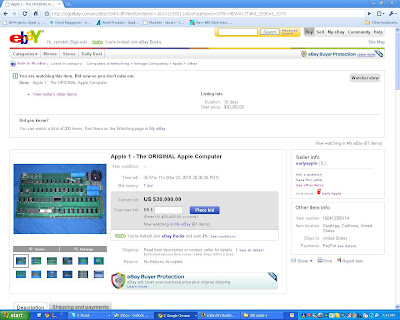 Here is the full description from the auction:

• Keyboard with modified cable for the Apple 1

• On the front of the Apple 1 are a few (appropriate!) configuration wires.

• There are two spots on the back where the solder mask has been removed, traces were cut and then repaired expertly (see close-ups).

• The LM323 voltage regulator was replaced, using a part taken from another Apple 1.

• Date codes for all chips may be found here. (date code is usually YYWW - 2 digits for Year plus 2 digits for Week).

• Otherwise, it is very clean. Wendell Sander, who has inspected a number of existing Apple 1s, proclaimed it the most pristine he'd seen.

This auction item is only offered within the United States of America, for delivery in the USA only.

This item is part of a collection of early Apple products and prototypes.

For a look at more items in the collection, Visit our eBay Store: Early Apple.

The founders of Apple knew that one of the keys to long term success was Customer Support. In the beginning that meant Steve Wozniak took customer phone calls to help in any way he could with the Apple 1. With the launch of the Apple II, everyone in engineering (and some of the production line technicians) took calls... but most Apple 1 questions still had to be taken by Woz. It was decided that to best support the Apple 1 owners the easiest thing to do was convert them to Apple II owners. Apple offered a trade-in deal to Apple 1 owners: trade in the Apple 1 for an Apple II (by late 1978 the offer also included a Disk Drive!). Most were traded in. This freed Woz from phone duties, rewarded early Apple adopters with a more capable computer, and allowed Apple to fulfill its commitment to great Customer Service.

Cliff dropped into Steve Jobs' office one day and couldn't help but notice the huge pile of Apple 1 boards - those that had been traded-in for the Apple II. "What are you going to do with those?", Cliff asked. Steve told him that they were to be destroyed. "Mind if I take one... Oh! And one for my brother?", Cliff asked. Steve reached into the pile and pulled out two boards and handed them to Cliff. Many people around Apple were amused and asked, "Why would you want one of those?" "It's history," was the reply, "just history."

Though hundreds of Apple 1 computers were sold, the trade-in deal reduced the population to the few that exist today. This is one that that got a last minute reprieve from the band-saw death pile!

We accept payments via PayPal only. PLEASE NOTE: We will only ship to your PayPal address in the United States, so please make sure that PayPal has your correct USA shipping address on file. You must not change your address after your bid is placed.

No returns. Please be certain about what is being offered by reading the description carefully. When in doubt, contact us for clarification before placing a bid.

We will only ship to your PayPal address in the United States, so please make sure that PayPal has your correct USA shipping address on file. You must not change your address after your bid is placed.

Items with a closing bid lower than $250 will be shipped USPS "Flat Rate". You will receive notification of shipment via email the evening of the day of shipment. Tracking is not offered for USPS shipped items.

Items with a closing bid greater than $250 will be shipped via UPS ground only. You will receive UPS tracking information via email the evening of the day of shipment. Items shipped via UPS will require a signature at the time of delivery.

Most orders paid before 4:00pm PST will be shipped on the next business day.

Items shipped via UPS will be insured to the full closing bid price. The handling price is the cost of insurance based on the starting bid. We will pay any additional insurance costs and signature fees.

We want you to be satisfied with your purchase. Please Ask a Question before buying if you are not certain. We will answer your questions as soon as we can. And If you have any issues once you have received your product, please let us know as soon as possible, and before leaving feedback, so that we may resolve your problem.

Many of the items were rescued from being lost during office and laboratory moves in the early days at Apple. They were "just prototypes" and "junk" that were cluttering up the place and weren't deemed worthy for storing. Management approval was always obtained for taking the rescued items... The items accumulated at their homes in boxes, closets, and drawers. What might have been lost, all these years later, are now historical relics that deserve better treatment and appreciation as collector items or museum pieces.

Some other items are being offered that are merely memorabilia. No suggestions of historical value are made for these items.

As much as practical, the rare or one of a kind items are accompanied with "Providence" - written documentation and statements by their creator and/or a witness that they are indeed the genuine article. Please read the the offering description carefully, before bidding, so you understand exactly what is included in the offering.

Brothers Dick and Cliff Huston were early Apple engineers, employee numbers 25 and 27 respectively, from late 1977 to mid 1984. They were there to celebrate when Apple shipped 100 computers in a single month. Working along side Woz, both were involved with the creation of the Apple II disk drive - Cliff designed the analog board in the drive, while Dick wrote the 13-sector "boot" ROM and fixed bugs in DOS. They also contributed to other early peripheral products, including the printer card(s), high speed serial card, and graphics tablet. Dick worked on DOS 3.2, Apple III SOS, ProFile hard disk, ProDOS, and Apple IIc. While working at Apple's Disk Division, Cliff "moonlighted" with the Macintosh group to integrate the Sony 3.5" floppy drive into the Mac design (have you ever seen a Macintosh with a 5.25" Twiggy drive? - they existed).

After leaving Apple, the brothers teamed up with other ex-Apple employees to found a company called "The Engineering Department, Inc.", also known as TED. The President and CTO of TED was Wendell Sander (Apple employee #16), who had done the digital design of many Apple peripheral products, cleanup of the Apple II design, the "Integrated Woz Machine" (IWM) disk controller chip, the Apple III, and many other projects. TED continued working with Apple as an outside contractor, producing prototypes such as Apple's first ARM-based project (the ARM was used later in Newton), chip designs such as the SWIM disk controller ("Sander-Wozniak Integrated Machine", not "Super-Wozniak Integrated Machine" as reported!), and support for Apple projects such as the Apple IIc-plus (TED integrated the 3.5" floppy disk). TED also design ed(hardware and software) "Little Blue", better known as Applied Engineering's PC-Transporter fpr Apple IIe and Apple IIGS.