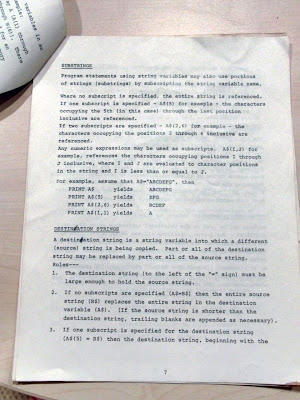 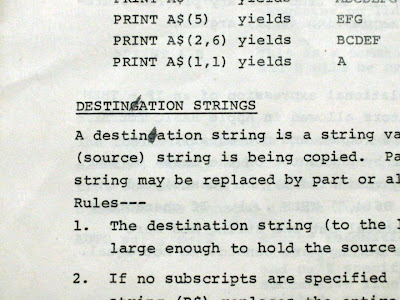 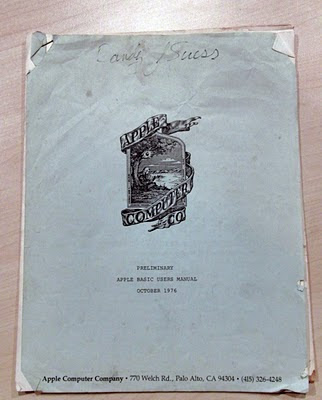 John Note: The name on the manual above appears to be Randy J. Suess.
Search results indicate this might be the same Randy J. Suess that was the co-creator of the BBS! Pretty cool, but not yet confirmed. 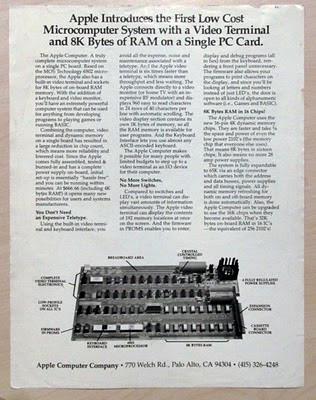 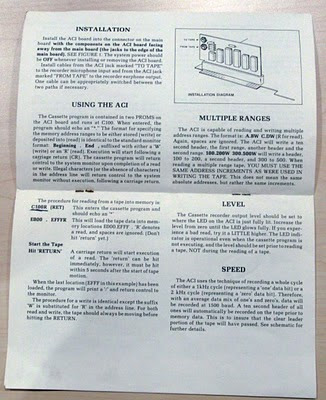 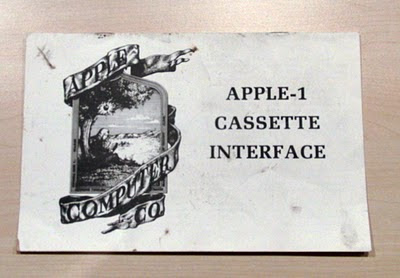 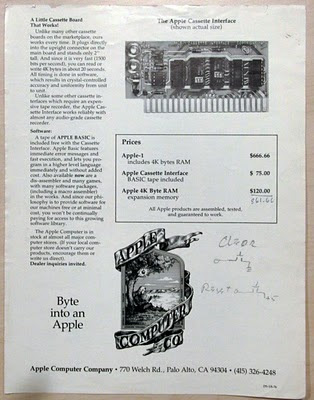 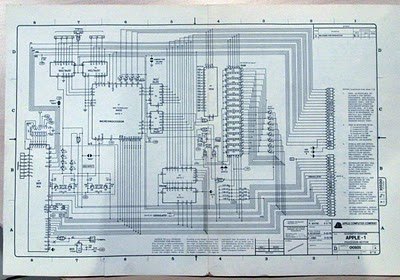 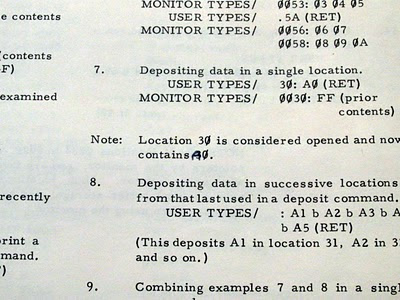 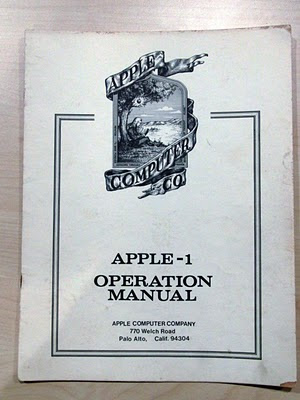 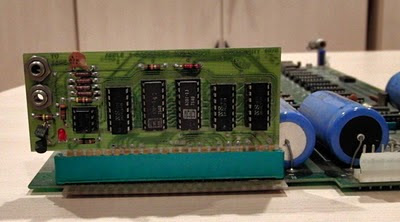 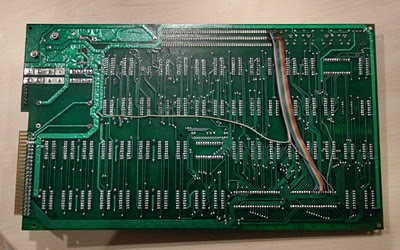 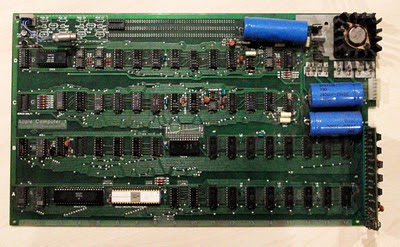 "I am an avid collector of vintage computers. In fact, I have over 5000'examples' in multiple storage facilities. Honestly, it kind of drives my wife nuts, and I don't have the time or energy to devote to the hobby so I'm in the process of downsizing my collection. I'm now moving from "quantity", acquiring every part for a given manufacturer to focusing only on museum quality very old computers. I'm currently working on an IBM 701 mainframe, and a Williams tube. If you happen to have an examples, or parts for these, please let me know.

I am the second owner of this Apple 1 computer. The original owner purchased this unit from the Byte shop in the summer of 1976. I already possessed an apple 1 computer, but this one was significantly more interesting to me. The one I owned was flaky, and had been heavily modified by it's previous owner (several failed breadboard experiments....). This one was extremely clean, had a full set of original documentation, and had a motherboard modification made by Steve Wozniak to add an interface for a potentiometer, and two tapes (one Apple Basic, and one was an experiment for the potentiometer). A potentiometer is just a fancy way of saying "paddle", and was the primary input device for most video games of the day. When I saw the tape experiment, it was clear to me this was an attempt to play the game "breakout" with a paddle, using the ASCII character set instead of graphical bricks. Steve Jobs and Steve Wozniak's first work together was creating the motherboard for Atari's Breakout arcade game. In fact, the successor, the Apple II had this potentiometer mod (now called a joystick port) built in, and shipped with the game "breakout".

This auction comes with the following items

This is an original unmodified motherboard hand wired and soldered by Steve Wozniak. Based upon the NTI logo on motherboard, and the capacitors, I believe this is from the second batch of computers Woz made (#14-24). Motherboard Includes the (in)famous white 6502 CPU, the original 4k of memory, and the 4k "upgrade" for a total of 8k RAM installed. I have not applied electricity to the motherboard in well over ten years, and do not intend to for this auction. Thus, you should assume this is an auction for a museum quality historical artifact, not a working computer.

The cassette interface was the only other "option" available to purchase beyond the 4k memory option at the time the motherboard was sold. The interface is unmodified since it's original purchase. Unfortunately, I was unable to find the two cassette tapes I know I own - Apple 1 Basic, and the Breakout test. If (or when) I continue to clean out my storage facilities, I will send the winner of this auction the tapes. I also have a collection of at least 10 audio "tapes" in digital format that I had successfully loaded onto the Apple 1 from my EigerLabs MPMan audio player in the mid 90's - I will package them up and email them to the winner.

This is the white operation manual with the 'isaac newton' apple logo on the cover. The manual is complete, including full foldout schematics of the power supply, processor section, and terminal section. This is an early version of the manual, as it includes some typo's which have been corrected with a pen. Given the age of this manual, it is in good condition. Some of the pages are frayed at the edges, the binding staples are a little rusty, and the pages have started to yellow a little. There is no writing in the manual except for the correction in the system monitor section

This is the very first version of the users manual, and not only includes many typo's (some of which have been corrected with a pen), it includes the following warning:

"This is a Preliminary manual. It will, most likley (spelling mistake is in the original) contain errors, incorrect wordings, etc. Your effort in noting these areas of improvement will be greatly appreciated. If you find an error or can suggest an improvement, please write:

The cover of the manual has been separated from the staple, and there are a fair amount of frayed edges and small stains within the document. The name "Randy" is written on the cover (possibly Randy Wigginton, hombrew computer club member, and apple employee #6). There are also two small holes in the back page

This is a smaller 6 page fold-up manual which includes installation diagrams, Cassette Interface Schematics and programming instructions. The manual itself is in good condition, with no holes, slight yellowing, and a single pen underline of a memory address. The binding staples are also a little rusty, but in good condition considering the age.

The front of the advertisement contains information relating to the motherboard, including an illustrated photograph. The backside contains informatoin and a photograph of the cassette board, the 'isaacnewton' apple logo, details on apple basic, and the price list. You can tell this is an early version because the price list only contains three items: Apple-1, Cassette Interface, and 4k Byte Ram. Additionally, the front illustrated diagram incorrectly labels the Motorola 6820 as the keyboard interface. The interface for the keyboard is actually one row up (Row B).

If the winning bidder is interested in using this computer again, I am more than willing to assist in any way that I can - I've amassed a fair amount of research on the board, and continue to find links to interesting pieces of technology that would aid in bringing this back to life (like this adapter that will let you use a modern PS/2 keyboard)

For those that have been following my recent auctions, I usually start the auctions at $.01 with no reserve. This one will be a bit different. I already have at least two offers, so I will start it with a buy it now option, and a low reserve (less than half the sale price of the last Apple 1 sold earlier this year). Most of my other auctions will resume my "guaranteed to get it out of my house or storage facility" auction style.

I am willing to ship worldwide, but will not deviate from using paypal for payment, which I am well aware will cost me a lot of money. The best possible shipping option would be to actually pick up this computer. I am willing to drive up to 100 miles in any direction from Chicago, or meet someone at the airport to facilitate the safe turnover. Otherwise, I will ship this in the best possible shipping bubble I can create to limit the amount of damage UPS, or USPS can do to it. "