More info on the datanetics keyboard 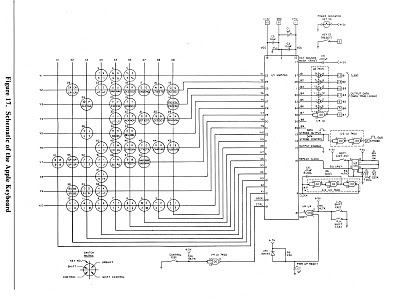 Wendell Sander informed me today that he believes the first Apple II keyboards may have been manufactured for Apple, by Datanetics, Inc. He sent me this early Apple II keyboard schematic scan from the 1979 Apple II Reference manual.
I also contacted Steve Wozniak yesterday, but he said that if he has any info on the Datanetics, that it is probably somewhere in storage. I also asked him about the modifications, but he did not know / doesn't remember, if the electrolytic cap was original or not.
UPDATE: from Cameron Cooper: "John, the early Apple II keyboards were definitely made by datanetics. You can see one of Mike's on this page: Apple II Keyboard
From what I gather around the keyswitch patents, it looks like Apple may have acquired either Datanetics or some of their technology."
Thanks Cameron!
Posted by John at 4:36 PM