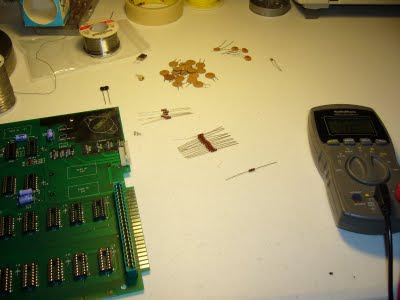 I started working on the second clone (the kit version) last night. I finished it tonite, and this one works. I haven't figured out what is wrong with the first one I built (the non-kit version), but I still cannot obtain any video.

The image above shows the PCB with DIP sockets, 22uF capacitors and diodes soldered into place. The resistors all came in one bag, so they had to be checked with a multimeter and sorted.

Looking at the image above this, you can see that this system is generating video. When I power up the board, I see a screen filled with flashing "_@_@_@_" symbols. I know that this is the correct behavior (An Apple 1 owner recently sent me this info). I don't have a keyboard hooked up yet, so what you see here is the expansion board I built a few months ago, being used to send a reset (recall that after you power up the Apple 1, you hit "Clear" then "Reset"). I don't always get the same results, but I am seeing the "\" and the "@" symbol most of the time after hitting reset. I believe this is correct behavior.
I decided to go ahead and test some of the chips I had laying around. I briefly swapped out the DS0025CN with a DS0026CN and I'm not 100% sure yet, but I think the DS0026CN might work. I need to play around with this a bit more to be sure. While I was at it, I also checked a few of the PROMs I had programmed.
I learned a few things while building this second board, and the first thing I learned was that .032 solder was too thick. I ended up using .020 63/37 rosin core on the second board (See video below). I really thought it was going to be too thin to work with, but it turned out to be perfect. I did use .032 on the components with larger PCB holes and thicker leads (e.g. the power regulators, and the big blue caps).
I also found that the first little PCB I built for the video RCA jack is messing up the signal. I suspect the LED, resistor and IN914 diode. The second board I put together last night works fine, but this one has no LED, resistor, or IN914 diode.
Posted by John at 3:18 AM