"The Silicon Valley home where Apple co-founder Steve Jobs grew up and built some of his first computers is now on the city's list of historic properties.
The historical commission in the city of Los Altos voted unanimously for the historic designation on Monday night, the Palo Alto Daily News reported. Any proposed renovations to the modest, ranch-style home now require additional review.
The home, where Jobs and his foster parents moved in 1968, is currently owned by Patricia Jobs, Steve Jobs' sister. The commission didn't need her permission for the designation, although she could appeal it to the city council.
Zachary Dahl, a senior planner with the city, said Patricia Jobs requested corrections to the city's evaluation of the property, but then didn't respond when it was sent to her for review.
"So I'm assuming that was an affirmative because I have had multiple communications with her over the past several weeks," Dahl said.
Steve Jobs, with help from his sister and Apple co-founder Steve Wozniak, built the first 100 Apple 1 computers at the home, according to the city's evaluation. Fifty were sold to a shop in neighboring Mountain View for $500 each.
Steve Jobs also wooed some of Apple's first investors and in 1976, established the first partnership for Apple at the home. The company later relocated to nearby Cupertino."
© 2013 The Associated Press. 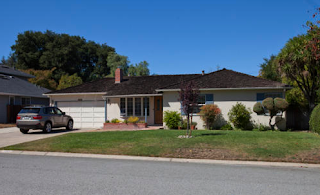 After Printed Circuit Boards were fabricated (in 2 runs), based on Steve Wozniaks hand-wired design (after several iterations); Legend holds that Patricia, and a couple of her friends were paid $1.00 per board, to "stuff" components, in the "garage".   Jobs and Woz would then test each board, and pull components and re-stuff when pins were bent.

"I'd get yelled at if I bent a prong," Patricia Jobs told The Daily News in an interview last month.
(source, Mercury News, Sept 2013)

So this whole bit, about Job's designing and building the Apple-1 in the garage, is completely FALSE.   Steve Wozniak did this on his own.  The prefabricated printed circuit boards (PCBs) were then stuffed with components, by Jobs, sis, and friends, in the "garage", afterwards.

So I pinged the Woz, and here is what he had to say:

In fact, both the Apple I and Apple ][ had been created and shown off at the Homebrew computer club before Steve Jobs knew they existed. I had given the Apple I design away for free to everyone there. At least one other club member had built one too.

No design ever took place in the garage. Nor did the manufacturing. The business took place in Steve Jobs’ bedroom, at least in the early days. He got parts and sales and publicity on his phone.