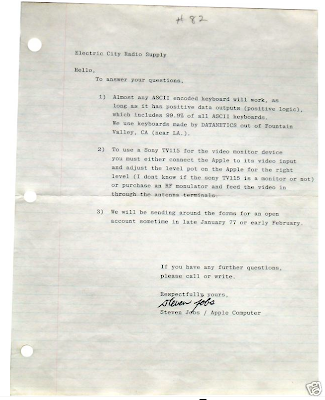 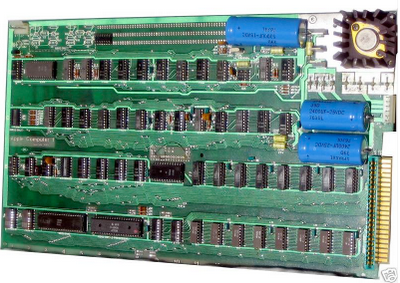 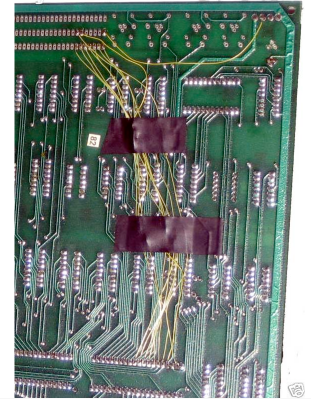 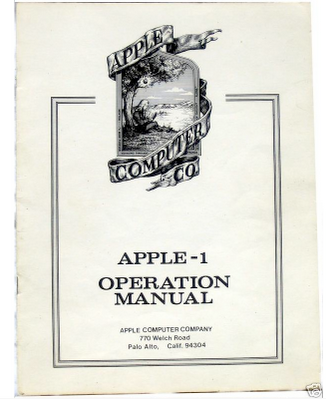 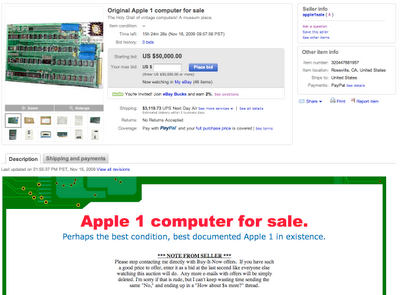 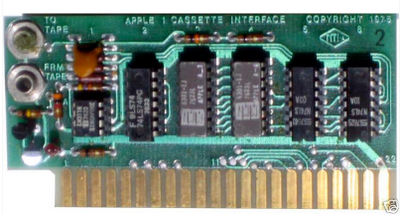 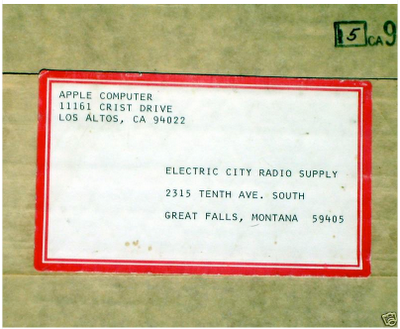 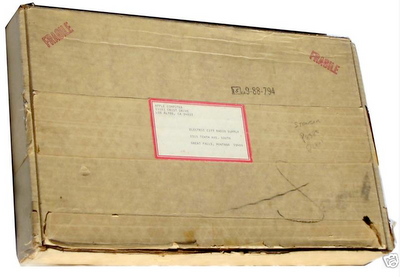 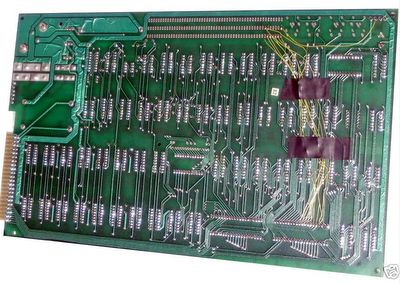 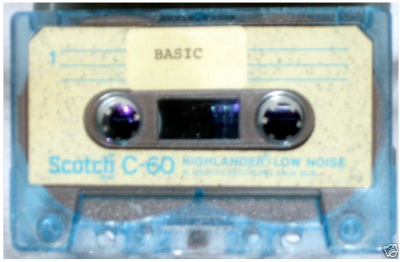 I asked the previous owner if I could use these images on my blog, and was granted permission... So here we are....
This unit apparently sold for 50,000.00 USD
This is the original text of the auction that I had gathered at the time, it may have changed afterwards, but this is what I have in my records:
Apple 1 computer for sale.
Perhaps the best condition, best documented Apple 1 in existence.
*** NOTE FROM SELLER ***
Please stop contacting me directly with Buy-It-Now offers. If you have such
a good price to offer, enter it as a bid at the last second like everyone else
watching this auction will do. Any more e-mails with offers will be simply
deleted. I'm sorry if that is rude, but I can't keep wasting time sending the
same "No," and ending up in a "How about $x more?" thread.
*** ADD'L NOTE FROM SELLER ***
I can't seem to get my reply to a question posted so I'll do it this way.
I have replaced two of the photos in this ad with pictures of the back
of the computer. The first shows the entire back of the system.
The other picture provides detail of the modification: several thin
wires connect a keyboard socket with pinouts on the motherboard
and two strips of electrical tape fasten the wires to the board.
Any Apple 1 is rare but this unit has impeccable provenance and is so clean...it literally may be the best surviving Apple 1.
Provenance:
Included in this sale are the following items to provide complete history and provenance for this unit:
◦ The original invoice for the sale, dated December 7, 1976. The sales person, Steven, is presumed to be Steve Jobs.
◦ A letter, typed on plain notebook paper and signed by Steven Jobs. Though undated, the letter refers to sending the buyer a dealer application in January or February, 1977.
◦ The original packaging in which the computer shipped, with a return address of Steve Jobs' parents address at the time.
◦ Photographs of every owner of this unit. The original owner was photographed holding the computer, the next owner did the same and the current owner took his picture with both the system and with Steve Wozniak
Clean condition:
To appreciate how clean this unit is you must consider that the Apple 1 was a hobbyist's toy. It has an open breadboard area on it specifically left open for folks to wirewrap their own modifications. Most Apple 1's out there are covered in solder and chips and wires every which way.
This unit has but a single addition, a keyboard port added in a mid-80s attempt to get it to boot up.
(btw, When Steve Wozniak saw this unit he told me that the first batches of Apple 1's used a brand of chip they later replaced because they blew out easily. He said those chips were on this unit, which is probably why the unit didn't boot in the mid-80s.)
List of items included in sale:
• The computer itself
• The original shipping box, with Steve Jobs' parents' house as a return address
• The original manual, with schematics to build your own Apple 1
• The tape interface card
• The manual for the tape interface
• A plain Scotch-brand cassette tape with a simply-typed label "BASIC" that came with the unit
• A letter, signed by Steven Jobs in 1976, explaining connecting a keyboard and monitor, as well as detailing when dealer applications would be available
• An original full-page glossy advertisement for Apple, included when the Apple 1 computer was shipped. (The ad is almost unrecognizable as an Apple ad due to its elaborate Isaac Newton logo. The artist who drew that logo was the third original partner in Apple Corp. His stake in Apple was bought out for a couple thousand dollars when the company started getting serious.)
• Photographs of all prior owners of this unit
Special Terms:
Due to the irreplaceable nature of this item, I am placing a $3,000 additional fee if the item is chosen to be shipped. I do not do this for the money, I do it to discourage shipping. I want it to be dramatically more expensive to have this relic shipped than to pick it up and safely transport it to its new home personally.
Posted by John at 10:39 PM